So last week, I laid out my plan for IVF for you guys. Last I left it, I was waiting for my period before I went into the lab for testing.

Guys, God has a sense of humor.

Something seemed different when my period didn’t show like I was expecting it to. I was two days late on Monday, and then someone brought in a crockpot of chili to work. I don’t think I’ve ever felt as nauseated by a smell in a long, long time. I ended up going home and working from there.

My husband and I were at Target that evening, and while they have failed me all of the time, I couldn’t help but grab a pregnancy test. We were going to go out to run the next night with our local running group and grab a beer afterwards, and I just wanted to put any doubt of my mind away.

I remember waking up Tuesday morning, needing to pee, and thinking to myself, ‘Don’t even get excited’, after all of the failed attempts I have had. I used the restroom, used my pee on a stick, and laid back in bed for a few minutes, positive I’d walk back into the bathroom to a one bar result.

I probably would have yelled for Chris if I wasn’t as shocked as I was when I saw it.

Sure, it was weak, but there was TWO. LINES. We’ve been trying since 2017 folks, and I have never gotten to see two lines on a pregnancy test.

Of course I had to message the infertility clinic that morning with a, ‘So, I was supposed to let you know when my period started. Well….’ They had me come in for a blood test, and I got the call that afternoon that, in my doctor’s own words “You are definitely pregnant.”

They had me come back in today for another blood test. I don’t think I’ve ever felt as anxious as I did before I went in. After trying for so long, and having a successful test… What happened if my numbers went down?

I did my best to calm myself and remind myself God got me here, so I was going to give him my worry and doubt.

I went in in the morning and had a cheerful nurse. “You’re going to get it!” She told me as I left. Sure enough, I got the phone call this afternoon that my numbers had pretty much doubled.

I go in next Thursday for an ultrasound, and then an appointment with my infertility doctor. With any luck, the ultrasound will go well and I’ll be dismissed to find a obgyn to keep an eye on us while the baby continues to grow.

I started this blog to share with you guys about my journey with IVF… But I still want to share my story with you, God has given us a gift, but I can still relate to years of frustration, sadness and mixture of guilt and envy at friends with their own kiddos. Let’s all give infertility the one finger salute and pray that this baby sticks.

Other than that great surprise, last week was pretty fun.

For Christmas I bought my hubby tickets for him and I to see Star Wars: Empire Strikes Back at the orchestra. We’re typically not orchestra goers, but since it was Star Wars and something different from our usual, I thought it would be fun.

I’m glad we went. It was a lot fun! They played the movie on a large projector and used speakers for the voices and sound effects. It was cool to hear the music live, and see the musicians play the various themes. I would recommend for anyone (but maybe see the first movie first so you’re not stumped on what’s happening). 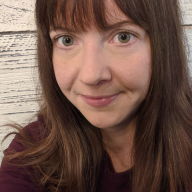 My name is Emily, and for the past several years I've been on this crazy infertility journey. My hopes are that we can curse, laugh, cry and try to stay sane through this thing together.